When in Amsterdam....look for the World of Litter. This summer a globe will float in het IJ, the water behind Amsterdam Central Station and in front of the EYE Film Museum. This globe was floated to bring awareness to the amount of plastic on Amsterdam streets and throughout the world. 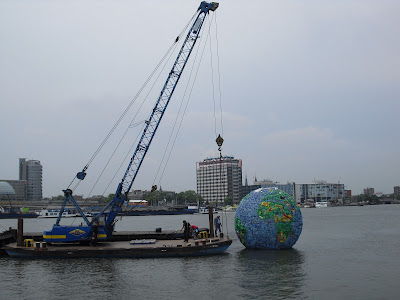 The globe was constructed by Peter Smith. Peter collected plastic trash from Amsterdam streets. The globe was built with only 10% of the garbage collected. Peter did not seek out any of this rubbish he just collected it on his normal movements around Amsterdam.

The floating of the "World of Litter" on June 21 is to bring attention to a national clean up day. Keep It Clean Day is to be held on  Friday 21 September 2012 (also International Peace Day) in the Netherlands. On the weekend of 21/22 September Amsterdammers and the Dutch will join forces with communities in German, Belgium and France to clean up of Western Europe. This is part of a global campaign called 'Let's Do It'. The organisation promotes clean up activities and highlights the waste and consumption.

Amsterdam is one of the most beautiful cities in the world. If we all do our little part we can keep the world free of litter.

O My Amsterdam Tours conducts an Eco-Tour to educate visitors to the city about Amsterdam's geography and the developments the city and Amsterdammers undertake to reduce carbon emissions. The World of Litter will be included on the O My Eco-Tour until September. On 21 September all O MY Amsterdam Tour Guides and staff will participate in Keep It Clean activities in Amsterdam.

Email ThisBlogThis!Share to TwitterShare to FacebookShare to Pinterest
Labels: Amsterdam, Eco-Tour, Keep It Clean, Let's Do It, World of Litter
Location: Amsterdam, the Netherlands Buiksloterweg 3, 1031 Amsterdam-Noord, The Netherlands

Its great that Peter Smith is trying to shard to become active with his community, its just a shame that more people couldn't help him with it. Plastic is one of the worst materials to leave to biodegrade, as its half-life is extremely long.